Ice Cube shut down rumors that his Friday costar Chris Tucker didn’t reprise his role in the cult classic’s sequels due to low pay on Wednesday.

The 52-year-old rapper-turned-actor claimed on Twitter that it was his 50-year-old costar’s status as a born-again Christian that led him to turn down a chance to appear in Friday’s popular sequels.

Ice Cube cleared up Tucker’s reasons for not continuing with the franchise after previously explaining that another Friday actor, Faizon Love, had been offered a small industry-scale payment for the film because of it’s extremely small budget.

Clearing it up: Ice Cube, 52, explained that his Friday costar Chris Tucker, 50, didn’t appear in the 1995 cult classic’s sequels because he didn’t want to ‘cuss or smoke weed on camera anymore’; still from Friday

‘We were ready to pay Chris Tucker $10-12m to do Next Friday but he turned us down for religious reasons,’ the songwriter explained. ‘He didn’t want to cuss or smoke weed on camera anymore.’

Tucker’s comedic relief position in the sequels Next Friday (2000) and Friday After Next (2002) was eventually filled by comedian Mike Epps, though he was playing a different character.

In an interview from November with All Urban Central, the Fifth Element actor explained that his faith was one of the reasons he opted not to return to the franchise.

‘Back then, I gotta tell you, one of the reasons why I didn’t do the second one was because of the weed,’ he explained. 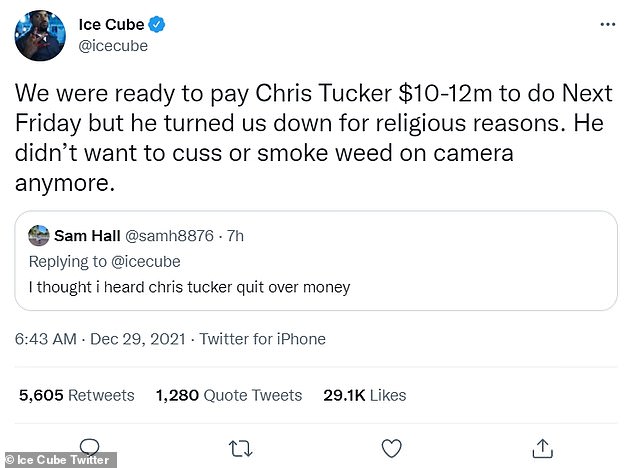 Setting the record straight: Ice Cube also responded to a tweet that speculated that Chris Tucker, who had played Smokey, had not appeared in the sequel over financial reasons 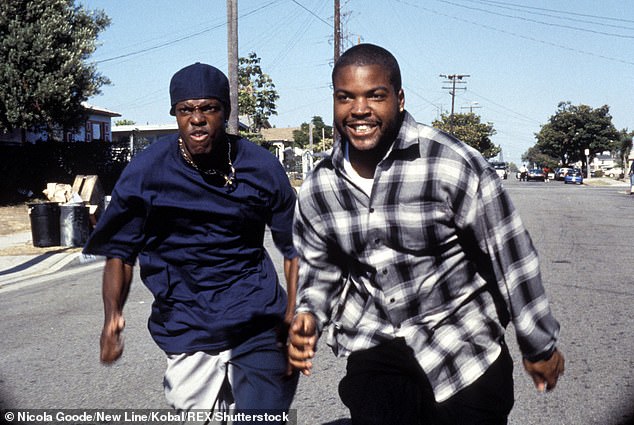 Moving on: Tucker explained to All Urban Central in November that he didn’t like the weed smoking and also wanted to focus on new projects instead of sequels; still from Friday

But Tucker also revealed that he preferred to focus on new projects in general rather than getting bogged down with sequels.

However, he would appear in two sequels to his popular Jackie Chan collaboration Rush Hour, but they came with impressive paydays, as he earned $20 million for the second film and $25 million for the third.

Earlier on Wednesday, Ice Cube defended himself over production of Friday, after people on social media reacted to actor Faizon Love saying he took only a $2,500 scale payday for the initial film. 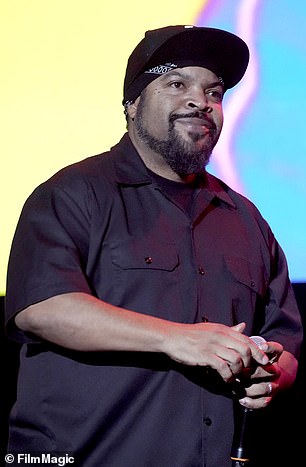 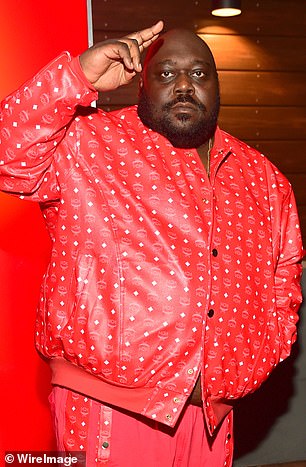 Clarification: Ice Cube also defended himself over production of Friday after people on social media reacted when Faizon Love, 53, said he took a $2,500 payday for the initial film

The rapper, who recently departed a film with Jack Black because of his refusal to get the coronavirus vaccine, took to Twitter on Wednesday to note that the film had a limited budget and that was understood when the performers signed up for the motion picture.

‘I didn’t rob no f***in body,’ he wrote, in response to a Twitter user’s remarks on a piece by Atlanta Black Star summarizing Love’s appearance on the YouTube show Comedy Hype.

In the interview with Comedy Hype earlier this month, Love, 53, said that he was offered double-scale to reprise the role of Big Worm (which amounted to $5,000) to appear in the 2000 sequel Next Friday. He said declined the offer to make the 2000 film The Replacements for a $100,000 payday instead. 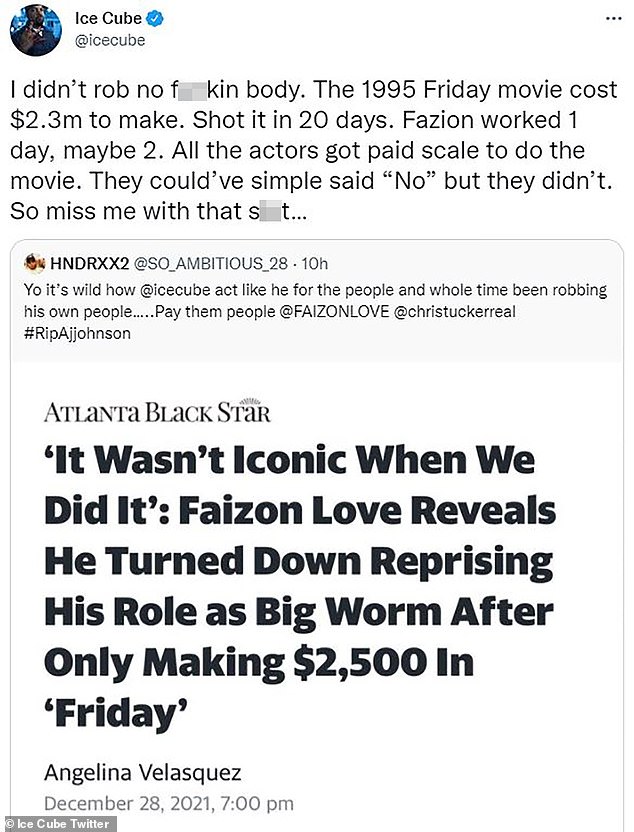 Speaking out: Ice Cube reacted after a Twitter user accused him of ‘robbing his own people’ in reaction to a story about Love’s payday for the first film

Love told Comedy Hype he would work on a Friday sequel for lower pay on general principle because of the positive impact the original movie had on his career.

Love took to Instagram on Wednesday to clarify his stance in the controversy, saying he considers Ice Cube both a ‘comrade’ and his ‘brother,’ while sharing a selfie of the pair.

‘I guess it’s a slow news week so let me say what I got paid is a moot point, it was the price of admission to a game,’ he said. ‘I have zero regrets.’

Love also thanked Ice Cube, DJ Pooh and Felix Gary Grey ‘for letting me be apart of such an iconic picture,’ adding, ‘I truly have nothing but love For these brothers.’

No beef: Love took to Instagram on Wednesday to clarify his stance on the controversy