John Travolta celebrated the New Year in style with his two children on Friday night.

The 67-year-old Saturday Night Fever star was dressed up in a tux to ring in 2022 alongside his glamorous daughter Ella, 21, and sweet son Benjamin, 11.

‘Happy New Year everyone,’ the actor wrote in a message to his Instagram fans.

Ella, an aspiring singer who has just released a new single called Dizzy, dazzled in a silver gown while beaming Benjamin wore a suit jacket over his T-shirt.

‘Happy new year everyone’: John Travolta celebrated with his daughter Ella and son Benjamin  on Friday night and shared a snap with his Instagram fans

The family, who are still reeling from the death of matriarch Kelly Preston 18 months ago, held each other close while posing in front of a white Christmas tree.

The actor has been documenting their celebrations on Instagram over this festive season.

On Christmas eve, he shared a video of him reading to his children in bed.

‘Here we go, ’twas the night before Christmas and all through the house,’ he started reading before the family pup pulled away causing Benjamin to laugh.

Family time:  Travolta shared a heartwarming video on Christmas that showed him reading in bed to his children in bed

‘Not a creature was stirring,’ he added with the exception of their dog.

The video continued with The Christmas Song about chestnuts roasting on an open fire in the background as John and his children cuddled up on a couch.

‘Merry Christmas everybody,’ John said as Benjamin and Ella smiled and waved at the camera.

The family enjoyed Christmas together at their Isleboro, Maine vacation home. 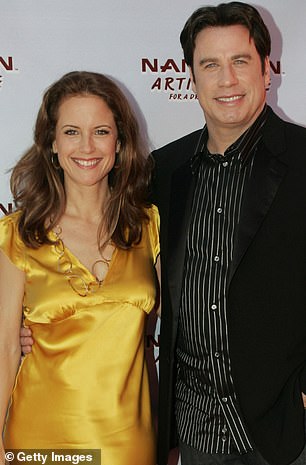 The Christmas holiday marks the second without Travolta’s wife Kelly, who tragically passed away at the age of 57 after a private two-year battle with breast cancer.

At the time of her death in the summer of 2020, ‘she had been undergoing medical treatment for some time, supported by her closest family and friends,’ said her rep.

A year after her passing the Grease star had opened up about an emotional conversation he had with Ben about life and death.

‘He [Ben] said to me once, “Because Mom passed away, I’m afraid you’re going to,” Travolta recalled on Kevin Hart’s talk show Hart to Heart.

John continued to say that he told him ‘the truth’ and said: ‘Nobody knows when they’re gonna go or when they’re going to stay,’ while adding that he and Kelly had different circumstances due to her health struggles.

Additionally the family lost son Jett in 2009, after he passed away at the age of 16 following a seizure which caused him to hit his head in the bathtub.