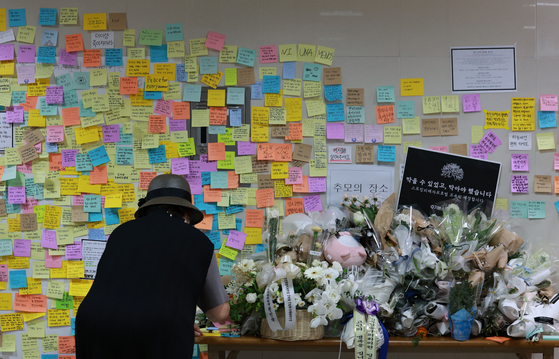 A woman writes a letter of condolence to a young subway worker outside a public restroom at Sindang Station in Jung District, central Seoul, on Sunday, four days after the worker was stabbed to death by her former colleague. [YONHAP]

The recent murder of a young subway worker at Sindang Station in Seoul has kindled a massive outpouring of grief and frustration across Korea, as mourners ask why local authorities failed to protect the victim from her alleged stalker after so many distress signals.

The walls outside the public restroom at Sindang Station on Seoul subway lines No. 2 and 6 in Jung District, central Seoul, where a 28-year-old woman was fatally stabbed by a 31-year-old man accused of stalking her for years last Wednesday, have been covered by countless Post-its mourning the woman’s death and venting anger at the police, judiciary and Seoul Metro — where the victim and suspect first met.

The victim and suspect were hired by the city-run Seoul Metro, which operates the majority of the subway lines passing through the Korean capital, in 2018. The male worker began to stalk his female colleague from late 2019, according to police.

The stalker was relieved of his duties in October 2021 and was awaiting a court trial after the victim sued him for stalking her and threatening to upload “illegally filmed video footage” of her on the internet if she kept refusing to date him.

Police didn’t publicly specify what the footage was, but explained that the suspect was found to have contacted the victim nearly 350 times from November 2019 to October 2021, begging her to go on a date with him.

A day after the victim sued him on Oct. 7, 2021, police arrested the suspect and filed for a pre-trial detention warrant, but the Seoul Western District Court rejected it, citing a lack of evidence that the suspect would try to flee or destroy evidence.

The suspect was released and allegedly continued to stalk the victim.

The victim sued him again early this year, but the police didn’t file for a pre-trial detention warrant and referred the case to prosecutors, who indicted him on stalking and illegal filming charges.

The first court trial for both lawsuits was delayed to next month. It had been scheduled to be held last Thursday — the day before the suspect allegedly followed the victim to a restroom at Sindang Station while she was on duty and stabbed her to death.

The victim was transferred to a hospital but died during surgery. The suspect was arrested not far from the scene, police said.

The Seoul Central District Court approved the suspect’s detention warrant on Friday, citing sufficient reason to believe he may try to flee or destroy evidence. The suspect is said to have repeatedly said he was “truly sorry” to the victim in court. 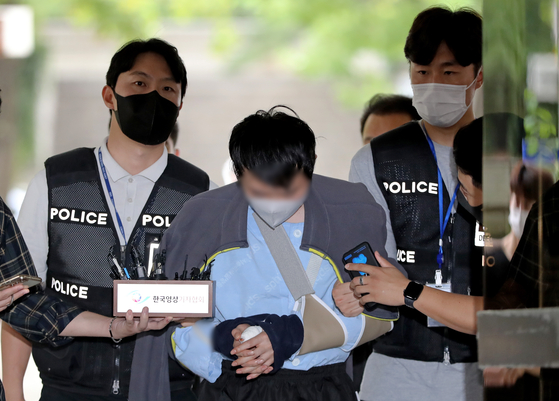 A 31-year-old man who faces charges of stalking and fatally stabbing his former female colleague arrives at the Seoul Central District Court on Friday for a trial on his pre-trial detention warrant. [NEWS1]

The suspect told police that the murder wasn’t planned, though officers said that he had prepared a knife and a shower cap, which he wore, in advance.

The case immediately sent shockwaves across the country, with many comparing it to the 2016 murder of a woman near Gangnam Station.

Six years ago, a 34-year-old man fatally stabbed a woman in her 20s in a public restroom near Gangnam Station on May 17, later telling police that he had never met the woman but killed her out of vengeance against women in general for looking down on him.

At the time, protests were held across the country against misogyny, which led to a growing interest in violence against women.

Many women showed up at Gangnam Station shortly after the shocking incident to pay tribute by writing mournful messages on Post-its.

Similar scenes unfolded at Sindang Station over the weekend.

“Nothing has changed since the Gangnam Station murder,” said a 29-year-old woman who refused to be named for this article, but said she traveled an hour and a half from Seongnam, Gyeonggi, to pay her respects.

“Gangnam and Sindang are both places that any woman living in Seoul or Gyeonggi could easily pass through,” said the interviewee as she called for harsh punishment on the suspect and strengthened measures to protect stalking victims.

“It’s just so shocking that a violent crime happened in such a public area.”